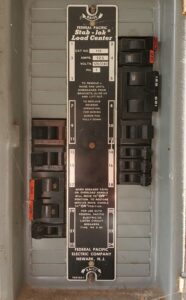 Millions of these panels were sold in North America between the 1950s and the 1980s. But soon, experts discovered that the panels were defective.

The story behind FPE panels

In the 1950s up to the 1980s, the FPE panels were popular for being affordable and easy to install. They sold to millions of homes and even gained the Stab-Lok name because of their functionality.

Soon, officials noticed a pattern of house fires in homes using the FPE panels, and they launched an investigation to find the problem.

The Consumer Product Safety Commission (CPSC) was in charge of the investigation and they first discovered that the panel was made with sub-standard materials. However, the CPSC had to stop the investigation because of a lack of funding, and FPE panels continued to be installed in even more homes.

Independent companies took up the investigation, and they uncovered more and more problems with the panels. The verdict was clear, FPE panels had a high rate of failure and posed safety hazards to homes.

Why FPE Panels are so dangerous

During a Class Action lawsuit, the New Jersey State Court ruled that Federal Pacific Electrical, “violated the Consumer Fraud Act because FPE knowingly and purposefully distributed circuit breakers which were not tested to meet UL standards…”

The problems found with the electrical panel includes;

These and more make FPE panels susceptible to catching fire and not performing optimally.

How to identify an FPE panel

It’s always best to replace an outdated Federal Pacific Electrical panel in your home. A licensed electrician can do this replacement. Don’t hesitate or risk anything more with an installed FPE panel.