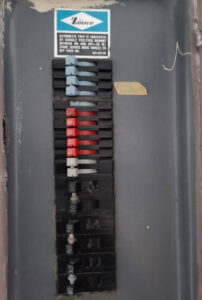 Zinsco panels are also known as Zinsco-Sylvania. These electrical panels were commonly installed in homes around the mid-1970s and while they worked fine at the time, Zinsco panels are now considered unsafe.

The thing is, Zinsco panels are only one of many old brands of panels that now present a safety threat to homes that have them. But you quickly find that not much is ever said about this specific panel, despite how popular they were at a time.

Having a Zinsco panel in a modern home is unsafe, and thankfully, it can easily be replaced for a panel that meets today’s safety codes.

How to Identify a Zinsco Panel

A Zinsco panel has a vertical line of color-coded circuit breaker handles running through the middle of the electrical bus. Its design includes aluminum bus bars. You can also find the Zinsco label at the top of the panel.

What makes a Zinsco panel dangerous?

In the 1900s, Zinsco panels were first manufactured with copper bus bars. However, in the 1960s there was a severe copper shortage which led to some changes in the National Electric Code (NEC). These changes included allowing aluminum to be used in electrical panels and companies like Zinsco took this option.

Aluminum is still being used today in some electrical panels, so you’re right to wonder how this makes Zinsco panels dangerous. The aluminum alloy used in the 1970s by most panel manufacturers differed from that in use now.

It was an element prone to oxidation, and it soon became problematic for long-term use of Zinsco panels.

Hence, experts have identified the reasons why this panel is a danger to your home as;

What are the general signs of a bad breaker or panel?

Zinsco or not, your electrical panel can fail and become a safety hazard. Here the general signs of a bad electrical breaker or panel-

What to do if you have a Zinsco panel

If you live in an old home or you’re simply unsure about the panel you have, call an experienced electrician to inspect your current panel. Do not attempt to fix or replace the panel yourself.

Replacing the panel is the best choice for the safety of lives and properties in your building, and it should be carried out by a licensed electrician.