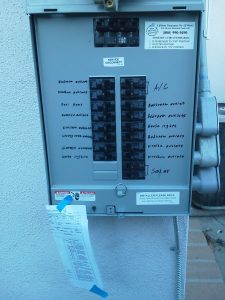 A safe electrical system is invaluable to every home and if you have a Federal Pacific Electrical Panel (FPE), replacing it is the best solution to ensure your electrical safety.

Federal Pacific Electrical Panels are commonly found in homes between 20 and 70 years old. These panels were first introduced by Reliance Electric in the 1950s and quickly became installed in millions of homes across the country. It was soon discovered that FPE panels were unsafe and present a great risk to homes that use them.

Your home’s electrical panel distributes electrical power safely across all circuits. It is also built to ensure protection by tripping off in situations like a short circuit, circuit overload, power surge, and so on. If the breaker cannot do this, the chances of an electrical fire starting increase dangerously.

How an FPE breaker puts your home in danger.

According to reports from the United States Consumer Product Safety Commission (CPSC), Federal Pacific breakers may fail to trip during an overload or short-circuiting. FPE breakers have recorded high rates of not tripping when necessary for your electrical protection. It was also discovered that the breakers tend to enter a lock-up. A lock-up describes a situation where a breaker that has tripped once will never trip in the future regardless of dangerous conditions like an electrical overload.

Most of the unreliability of the panel is due to the use of cheap materials in its manufacture and their limited original design.

Electrical inspectors always encourage homeowners to replace and not repair a Federal Pacific Electrical Panel. Electricians may also hesitate or refuse to fix problems with these panels because they cannot guarantee the results or your electrical safe afterwards.

You may have a Federal Pacific Electrical Panel if your home is as old as between 20 to 70 years. Since the company no longer exists, you can’t purchase a new FPE panel. It can only be present if it was installed in older homes. You can identify an FPE panel with the labels or logos on the front cover. The common appearance is an orange and white label.

You can also look out for the name Stab-Lok written inside the panel or on the breaker. A signature red label across the front of the panel is another indication.

The cost of replacing a Federal Pacific Electrical Panel may vary across electricians, location, and other factors. The replacement can generally cost anywhere from $1500 to $2000, and even more.

The replacement will include any necessary repairs, rewiring, moving the panel location, and installation that are up to recent codes.